St. John’s, Newfoundland and Labrador: Red Moon Resources Inc. (“the Company” – “Red Moon” TSX-V:RMK), is pleased to announce that it has loaded its first shipment of gypsum/anhydrite from its Ace mine in western Newfoundland. The Company is working with Vinland Materials Inc., a related company, to undertake contract mining operations and secure sales agreements for gypsum and anhydrite. The Company has worked diligently to initiate shipments in 2018 and given sufficient lead time is now looking forward to sourcing sales contracts in 2019. The commercial implications for the Company will be described in more detail as ongoing production is established and the full context of market availability is demonstrated.

Gypsum is mined by traditional open-pit methods, which are amenable to scaling of production to meet the demand cycle. A deepwater port connected by a haulage road is located approximately 9 kilometres from the Ace mine. The project is situated off a paved road approximately 6 kilometres from the Trans-Canada Highway and 20 kilometres from the local service centre of the Town of Stephenville. The open-pit operation is located in the dormant Flat Bay mine that produced at least 15 million tonnes of gypsum prior to 1990. The Ace mine covers approximately 11.79 hectares and has the potential for a 10 year mining life at an average production rate of 350,000 tonnes per year. The company believes that market opportunities currently exist to warrant development but future production rates are speculative at this time due to normal commercial mining risks associated with scaling of production, production costs, competition, commodity prices and market availability.

The markets for gypsum are primarily in the cement and wall board industries and are based on negotiated contracts. With the increasing switch from coal to natural gas fired power generation plants in the United States the supply of synthetic gypsum produced by sulphur dioxide scrubbers in power plant smoke stacks has been significantly reduced. As a result, an increase in demand for natural gypsum has emerged. If the Company can access markets requiring production rates beyond the Ace mine capacity the Company is prepared to develop other existing gypsum deposits located on its mineral licences which cover approximately 700 hectares of the historic Flat Bay gypsum mine including unmined material and potential extensions of known deposits.

Patrick Laracy, President of the Company said, “We are extremely pleased that Red Moon is now a production company with the prospect of positive cash flow from the Ace mine in the near future. I would like to congratulate Vinland and its subcontractors on their role in putting Ace into production on an expeditious schedule in order to close sales in 2018. We obtained final mine approval on July 19th and in little over a month our first sale and shipment has been made. The Company continues to work towards establishing the Ace mine as a source of high quality natural gypsum/anhydrite for the cement and wall board industries.”

Patrick J. Laracy, PGeo, President is the qualified person responsible for the contents of this news release as defined in National Instrument 43-101. 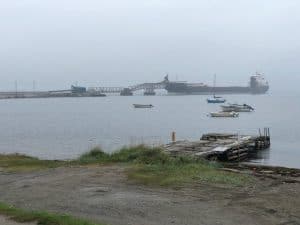 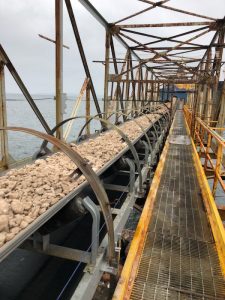 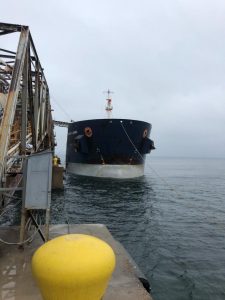 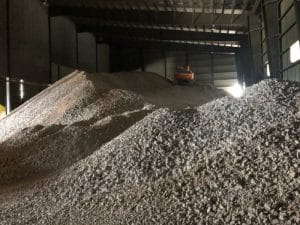